Scientists Uncover Why You Can't Decide What to Order for Lunch

If you've ever found yourself staring at a lengthy restaurant menu and been completely unable to decide what to order for lunch, you have experienced what psychologists call choice overload. The brain, faced with an overwhelming number of similar options, struggles to make a decision.

A study conducted in California nearly 20 years ago is illustrative of the effect. In that study, researchers set up a table offering samples of jams to customers in a grocery store. At times, 24 jam samples were provided; at other times, only six. It turned out that although shoppers were more likely to stop and try samples when the table was jam-packed, they also were much less likely to actually purchase any jam. Shoppers were somewhat less likely to stop at the table when it had only six jams, but when they did, they were 10 times more likely to make a jam purchase than the customers at the fuller table.

Lunch entrees and fruit preserves might seem trivial, but choice overload can sometimes have serious consequences, says Colin Camerer, Caltech's Robert Kirby Professor of Behavioral Economics and the T&C Chen Center for Social and Decision Neuroscience Leadership Chair. As an example, he points to Sweden's partial privatization of its social security system. The government allowed citizens to move some of their retirement savings into private funds. The government gave them hundreds of funds from which to choose, and conducted a large advertising campaign encouraging them to make their own choice. At first, nearly 70 percent of the eligible adult population took an active role in choosing a fund, but the percentage quickly dropped off. After 10 years, only about 1 percent of newly eligible Swedes were making an active decision about where to put their retirement money.

Now, a study conducted at Caltech by Camerer reveals new insights into choice overload, including the parts of the brain responsible for it, and how many options the brain actually prefers when it is making a choice.

In the study, volunteers were presented with pictures of scenic landscapes that they could have printed on a piece of merchandise such as a coffee mug. Each participant was offered a variety of sets of images, containing six, 12, or 24 pictures. They were asked to make their decisions while a functional magnetic resonance imaging (fMRI) machine recorded activity in their brains. As a control, the volunteers were asked to browse the images again, but this time their image selection was made randomly by a computer.

The fMRI scans revealed brain activity in two regions while the participants were making their choices: the anterior cingulate cortex (ACC), where the potential costs and benefits of decisions are weighed, Camerer says; and the striatum, a part of the brain responsible for determining value.

Camerer and his colleagues also saw that activity in these two regions was highest in subjects who had 12 options to pick from, and lowest in those with either six or 24 items to choose from. Camerer says that pattern of activity is probably the result of the striatum and the ACC interacting and weighing the increasing potential for reward (getting a picture they really like for their mug) against the increasing amount of work the brain will have to do to evaluate possible outcomes.

As the number of options increases, the potential reward increases, but then begins to level off due to diminishing returns. "The idea is that the best out of 12 is probably rather good, while the jump to the best out of 24 is not a big improvement," Camerer says. At the same time, the amount of effort required to evaluate the options increases. Together, mental effort and the potential reward result in a sweet spot where the reward isn't too low and the effort isn't too high. This pattern was not seen when the subjects merely browsed the images because there was no potential for reward, and thus less effort was required when evaluating the options.

Camerer points out that 12 isn't some magic number for human decision-making, but rather an artifact of the experimental design. He estimates that the ideal number of options for a person is probably somewhere between 8 and 15, depending on the perceived reward, the difficulty of evaluating the options, and the person's individual characteristics.

Of course, a trip to the nearest grocery store is likely to reveal that lots of products come in many more than a dozen varieties. There might be a whole aisle of toothpastes of varying brands, sizes, flavors, textures, and properties, and on the condiment aisle, there might be dozens of kinds of mustards to choose from.

Camerer says that's partly because people tend to feel freer and like they have more control over their lives when they have more options to choose from, even if having all those options ends up distressing them at decision time.

"Essentially, our eyes are bigger than our stomachs," he says. "When we think about how many choices we want, we may not be mentally representing the frustrations of making the decision."

Camerer says future research in this area could explore and attempt to quantify the mental costs of making a decision.

"What is mental effort? What does thinking cost? It's poorly understood," he says. 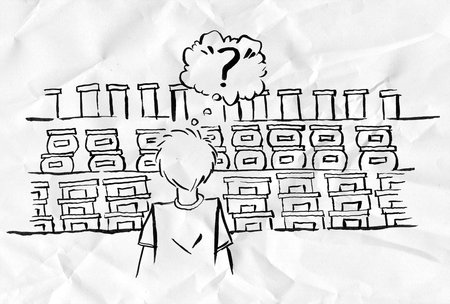 Too many choices can make it hard for a person to make a decision. Scientists have uncovered why. Credit: Caltech
Image Lightbox 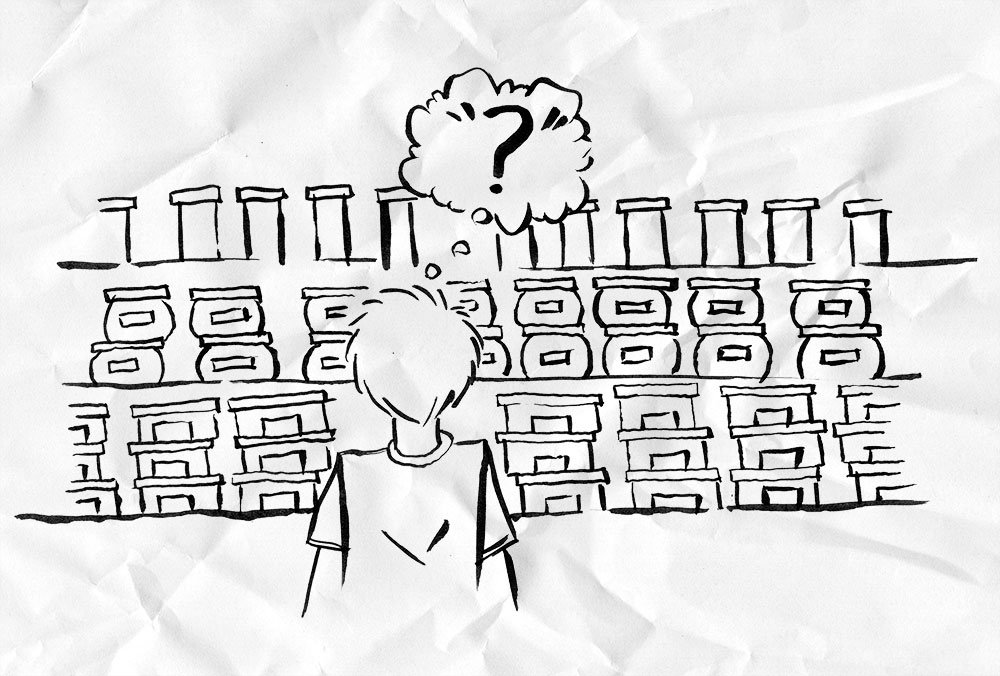 Too many choices can make it hard for a person to make a decision. Scientists have uncovered why.
Credit: Caltech
Download Full Image
Subscribe
The Caltech Weekly
Share this
Tags
neuroscience and behavioral science social science
Related Links
> Caltech Researchers Pinpoint Brain Region That Influences Gambling Decisions
See All News   >